This year is going better for us as far as puppy production.  We've had two litters of six healthy puppies, so there are 12 happy new owners so far this year.  And we have just bred another girl.  I have opened up the waiting list for additions again, and it has become pretty long again.  But you're welcome to apply to be added if you are ready to wait for a puppy.  Several shows have finally been scheduled in MI, so we will be starting that again beginning the end of next month.  Unfortunately, at this time, they are still saying no spectators, only those entered in the show are being allowed in.  Hope everyone has a nice summer in spite of the remaining restrictions we must follow.

April 26 - Birch Run, MI - Faith wins Winner's Bitch, Best of Winners, Best of Opposite Sex, Best of Bred By Exhibitor and Group One Bred By Exhibitor for a 3 point major which makes her a NEW CHAMPION!  She is now officially Champion SnugglePugs Faith Everlasting.

2013 SHOW YEAR
Aug thru Sept.  We've gone to several shows and now have two girls almost finished, and Woody has 19 of his 25 Grand Champion points.  Our BIG show news is we attended the PDCA Nationals in Chattanooga the week of Sept. 15.  Our best wins were our little 5 mo. old SnugglePugs Patria (by Woody out of Ch. Why-Nonna) was BEST PUPPY of all the males and females in the 4-6 mos. Beginner Puppy class.  Then our SnugglePugs Faith Everlasting was WINNERS BITCH for a 5 point major!  We are so proud!  Brenda also showed friend Jackie's Krissy in the Open Fawn class and got 2nd, and our Rainy (Woody x Joy) got 5th of 13 in her class.  Woody was in the huge Best of Breed class and showed nicely but no award.  We have a few more shows to go to so we're hoping to finish the girls.

July 12 - Marshall, MI - WOODY IS A CHAMPION!!!  Thank you judge Sandy Wheat.  The next day, Woody was Best of Breed, and the next he was Best of Opposite Sex - so he also has a good start on his Grand Championship!

May - Corunna, MI - Woody is Best of Winners for 2 points.  Just that last major to go to be CHAMPION.

April 28 - Our Joy (SnugglePugs Joie De Vivre) is Best of Winners and Best of Opposite sex  in Birch Run for a 3 point major!

November 2-6 - Dahtay is WB, BOW, one day, and RWB on two other days.
November 11-13 - SnugglePugs Joie De Vivre "Joy" (Gr. Ch. Firehouse Shayna Lahava/SnugglePugs Dahtay Navet)wins her first point at the Muskegon KC show in Kalamazoo.  She was RWB the other two days.

August 20 - Muncie, IN, Central Indiana Pug Club Specialty - Wynonna is WB for a 4-point major and is now a NEW CHAMPION!  We moved her up to Best of Breed, and she got two Selects for 3 points, 1 major, towards her Grand Championship.

April 16 - Our Dahtay's sister, Gidget (SnugglePugs Lil Surfer Girl) won her first points - a 4 point major! - and Best of Opposite Sex, at the Harrisburg, PA show, owned by Rita Oates.

March - CO - Heidi Hicks'  SnugglePugs Sum Like It Hot@Rolypoly ("Chowder" -  a Hank/Jolie son) finished his International Championship by taking two Best of Breed and Group 2's.  Heidi also received information that Chowder was ranked #7 UKC Pug for 2009 and has been invited to the UKC Top Ten Finals in July in Indiana.  Heidi is starting him next month in AKC showing.

October 31 - Pug Dog Club of America National Specialty - Leelee and daughters were FIRST in the Brood Bitch Class.
October 27 - Central Carolina Pug Specialty - Our Leelee with her two daughters, Dahtay and Gidget from MD, were third in the Brood Bitch Class.
Also, at these shows, Mixon (see Aug. 6-9 below), won two firsts and two thirds in the classes and sweepstakes.

October 3 - NEW CHAMPION!  Denali has finished her Canadian Championship!  She is officially Can. Ch. SnugglePugs Adventure To Kalmadray sired by our Ch. Woowoo Your Cheatin' Heart (Hank) and out of our SnugglePugs Majolica (Jolie).    This is Hank's second champion and Jolie's first.  To see Denali's pictures, go to my "photos" page label - sub-heading "show photos" will appear, click on that.

Aug 6-9 - News from Bonny Allegro - North Carolina - she has begun showing her new male puppy, Mixon (all SnugglePugs bloodlines, bought from Aviator Pugs) - He won some points shortly after turning six months, and this past weekend got a 3 point major, a reserve to a major, Best Puppy twice, and Puppy Group 3.  Her two females picked up a major and a reserve to a major, Bonny had a great weekend!

July - Denali (Hank/Jolie) is a black girl we sold as a pup to Jenny Duffy in CAN.  She won a point earlier this year, then at the recent Kinston shows she was Winner's bitch and Best of Winners (2 pts) at the Toy Dog Specialty, and on Sunday she was Winners Bitch again (2 pts.) and Best of Opposite Sex over a frequent-winning special.  All the ones she beat were fawn.  UPDATE - 9/2009 - Denali is now up to 8 points!  Should finish soon.

03/21 - NEW CHAMPION!  Joseph has finished - he is now officially Ch. SnugglePugs Proud As A Peacock.  Purchased as a pup by Rita Oates, MD.  Sire is Ch. Woowoo Your Cheatin Heart, dam is Kelly (by Ch. Bayvue's Cinco De Mayo).

02/07-02/10 - Went to the Indy Winter Classic in Indianapolis.  We showed Leelee and Beau made his debut.  We did not win any points, but the kids placed okay.  Friday was a Pug specialty, and Leelee got a 2nd in her large class.  Beau did very well for his first time out, and was the youngest in his class, just turned 7 months.  He placed every day, including a 2nd. of 5 and 3rd of 6.
5/10-5/11 - Midland show.  Leelee was Best of Winners on Sat., and Beau was Reserve Winner.  On Sunday, Beau was Best of Winners, and Leelee was Reserve Winner.  Sheik showed for his first time in the fun match Friday night and won the Toy Group!  (Age 3 mos.)
5/17-5/18 - Flint show.  Leelee was Best of Breed on Sat. and Beau was Winners Dog and Best of Opposite Sex.  On Sunday, Beau was Best of Breed, and Leelee was Best of Opposite Sex.
5/23-5/26 - Kalamazoo show.  Beau won his class every day, was Winner's Dog for a major on Friday, and was Reserve Winner's Dog on Sunday.  Leelee was 2nd three days, and won her class and was Reserve Winner's Bitch on Sunday.
5/31 - Beau was Winner's Dog at Toledo show.  Sheik went in the puppy match and won the Toy Group (He's now 2 for 2 in Groups).  Leelee not shown due to no majors.
6/14 - Traverse City - Beau was Winner's Dog, Best of Winners, Best of Opposite Sex, and Best Puppy.  Jolie was entered as a numbers filler - she was Winner's Bitch, her first point.  At the fun match the night before, Jolie won Best Adult in Match, and Sheik won the Toy Group - again!
6/15 - Traverse City - Beau was Winner's Dog, Best of Winners, Best of Opposite Sex.
6/20 - Valpariso Popcorn cluster - Beau was Reserve Winners Dog on Thurs., Friday at the puppy match, Sheik got Group 1 AGAIN!!!  #4!!!
8/4 - Got word from Bonny, Beau's new owner in NC, that she has won with him a couple days this past weekend, and he now just needs that last 3 pt. major to finish his championship.  GO BEAU!
8/14 - We went to the Central Indiana Pug Club Specialty, Sheik and Leelee both won their class there.
8/31 - Just got word that Joseph (SnugglePugs Proud As A Peacock) got a major today!!  WOOO HOOO!  He now just needs a 3 pt. major to finish.
10/19 - SnugglePugs Albert Pugstein got a major in IL today.  He now also just needs that last 3 point major to finish, like his son, Beau. 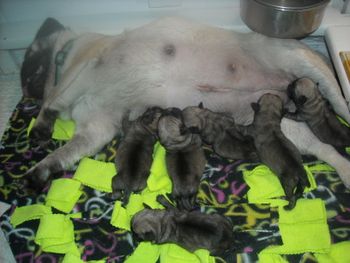 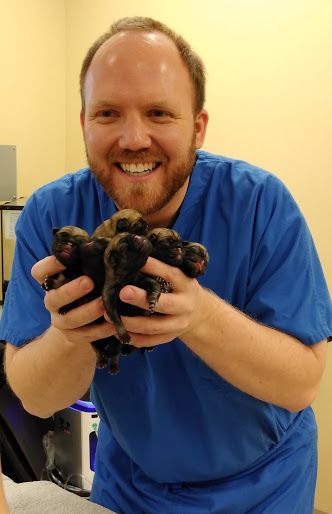